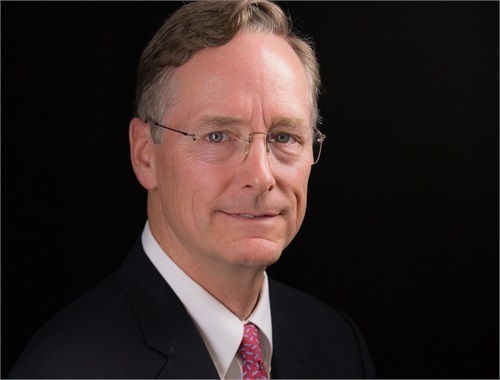 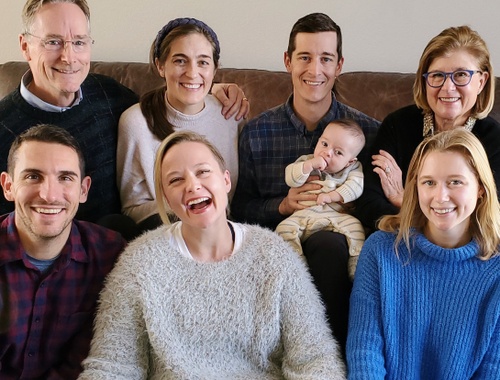 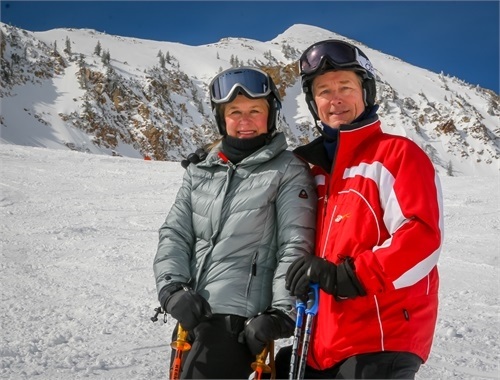 ... and a part-time professional ski instructor (pictured with wife Tina).

David grew up in a multi-generational family of entrepreneurs and had a front-row seat seeing how our country and his family benefited from his family’s creative problem solving businesses. He also saw his family struggle with many of the issues that wealth can create inside a family.

On his Dad’s side of the family, his great, great grandfather, Eberhard Anheuser, was the co-founder of Anheuser Busch, Inc., the maker of Budweiser beer. By figuring out how to extend the shelf-life of beer his business was able to distribute its beer nationwide and became the first national beer company with the phrase “This Bud’s for You”. On his mother’s side of the family, during World War II, the Navy was struggling with how to get men and equipment the last 100 yards from ship to shore. His grandfather helped solve the Navy’s problem by pivoting his manufacturing business from making steel containers to designing and making large, floating steel docks. These docks, in their own way, contributed to helping us win the war. More recently David’s father started a business in the 1960s which was one of the first companies to design and manufacture parts for computers. He later sold it to Control Data Corporation, a much larger computer manufacturing company in the same town. Consequently, David considers himself one of the oldest digital natives you’ll ever meet!

As someone who has grown up in a multi-generational wealthy family, David has seen both the good and the bad wealth produces inside families. One of the biggest challenges he sees as a wealth manager is not letting the wealth also create non-productive entitled family members who squander the family’s wealth. Unfortunately, this is a global problem. In Scotland they say, “the father buys, the son builds, the grandchild sells, and his son begs.” In the United States they say, “shirt-sleeves to shirt-sleeves in three generations.” And in Italy they say, “from the stable to the stars and back again.”

Since 2001 when he co-founded his family’s virtual family office with his father and became its lead Advisor, David has been navigating these challenges in his own family. He and the team he has assembled have creatively developed multiple strategies over the last 20 years and are enjoying watching them come to fruition. One strategy, for example, includes paying a portion of each family member’s educational tuition for the next 7 generations. This strategy serves the family’s values around the importance of education. And it encourages all family members to become productive members of their communities and possibly helps them create their own family businesses and wealth.

With David’s expertise, other high net worth families have hired him to help them manage their own family dynamics and take advantage of his creative problem solving with their other planning challenges. For example, David helped one client improve their family business’ retirement plan management. This not only helped his client improve their own family’s retirement nest egg but also their many employees’ nest eggs as well. Now more than ever with the Great Resignation, business owners are seeking David’s expertise to help them attract and retain top talent with superior employee benefit programs.

Outside of work David enjoys skiing (including being a PSIA Certified Ski Instructor), photography (website), hiking (website), biking, and flying small planes. David lives in West Hartford, CT with his wife Tina and together they have three adult children and two grandchildren. 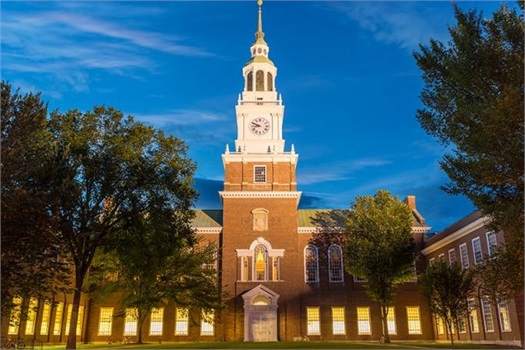 David graduated from Dartmouth College’s Amos Tuck School of Business in 1987 with a Masters in Business Administration (MBA). He graduated with the Arnold F. Adams Entrepreneurship award. Prior to that, he graduated from Middlebury College in Middlebury, VT with a degree in Economics.

David is a member of the following professional finance groups that each require a) rigorous testing of their extensive bodies of knowledge before being invited to join them,  b) ongoing continuing education and c) adherence to strong ethical standards of behavior:

David is also a member of the following professional finance trade associations whose members generally have one or more of the above professional designations. These memberships give David access to some of the best minds in wealth management: 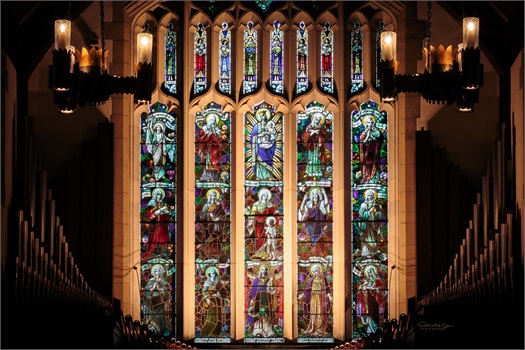 David is a Vestry member and Co-Treasurer at his church and is a Trustee on the following four endowment Boards of Directors advising them on their investment portfolios totaling $140+ million:

David recently participated as a panelist in a Financial Planning & Wealth Management Summit for women entrepreneurs organized by Purvi Tantia. In their 20 minute interview David describes how he helps families create and sustain wealth across generations. The family's wealth can then, in turn, help some of those family members fund their own entrepreneurial startups.

To view their 20 minute interview click the link below. 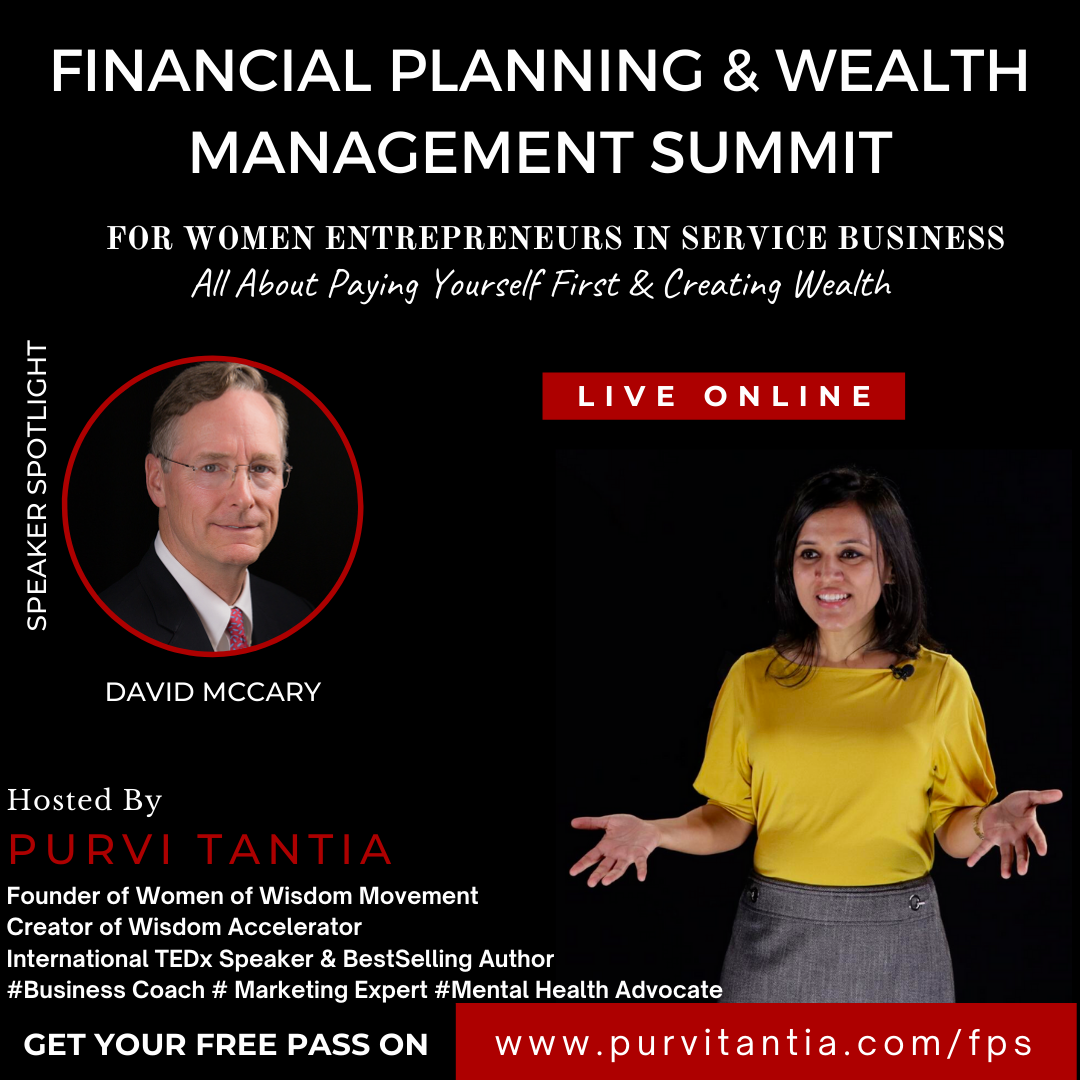 This short video explains how fee-only, buy-side fiduciaries like David have fewer conflicts of interest with their clients compared to commission-based, sell-side advisors.

Fee-only fiduciary advisors like David comprise only about 1% of all advisors in the country.  So finding one is like finding a needle in a haystack!

Make an appointment with Dave